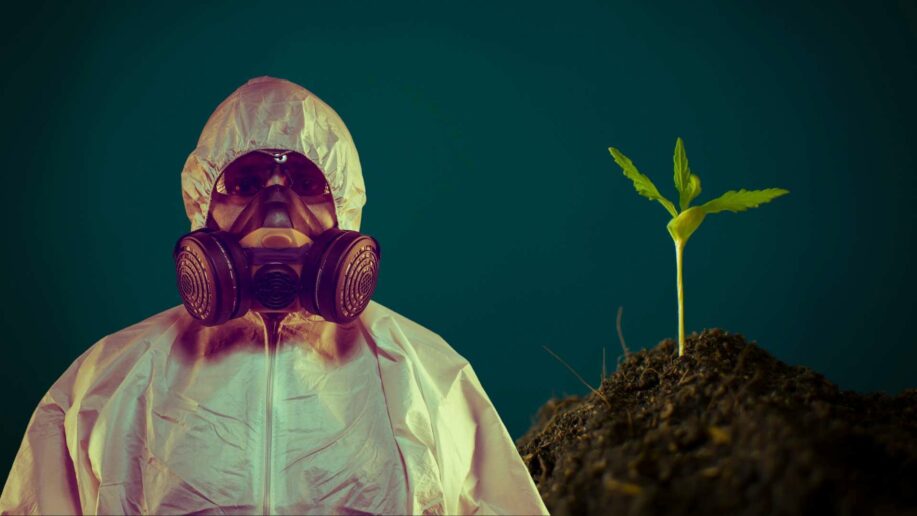 I am a Cannabis Farmer Now: Coronavirus Quarantine Diary — Chapter 3

“And in the darkest hour, life begins anew.”

I have decided to throw my lot in with the optimists, and bring new life into the world just as it seems hellbent on destroying itself.

Yes, I have decided to grow pot.

• Cannabis is the Solution: Coronavirus Quarantine Diary – Chapter 2
• What It’s Like Buying Weed in the World’s Biggest Cannabis Dispensary
• Why Growing Seeds From Your Baggy May Not be Such a Good Idea

The “decision” was made when I was in my laundry room a few days ago and found two seeds in my rolling tray. When are they from? Are they female? What strain doth hide within these seeds? There’s no way of knowing, but the same goes for parenthood – you can’t know what you’re getting when you decide to bring a life into this world, it’s a leap of faith in creation.

Also, I don’t really have any other options at the moment. This either works or I have to be one of those quarantine guys who talk about making sourdough bread and “sourdough starter” all the time. Not gonna happen, my great-grandfather did not die in the Spanish Flu Pandemic for me to go out like that in this one.

After finding the seeds, I googled “germinate marijuana seeds.” I remembered this from my last foray into marijuana cultivation, circa 1997. I was flipping burgers at a Sonic Drive-In in Austin, Texas, around the time Mike Tyson bit Evander Holyfield’s ear, and a young basketball player from Lower Merion High named Kobe Bryant was first getting famous. I thought of this when I googled germinate, and then it hit me how old I now am, and I forgot what I was searching for until the late afternoon.

Long story short, back in 1997, I took a weed seed and germinated it between two napkins and then planted it in a styrofoam Sonic cup with some dirt from our backyard. It sprouted a couple of weeks later, and that’s about when I lost interest.

Now though? I got plenty of time around the house to focus on a new hobby.

So, in between episodes of PJ Masks and Daniel Tiger, I put the two seeds on damp paper towels between two plates for about a day and a half, and they sprouted.

I took them out to the balcony and planted them in two separate pots ten floors above the ground and the coronavirus.

Now, a few things to take into consideration here. We live in a complex of 17-story apartment buildings, and our balcony is visible by enough people to fill a decent-sized high school football stadium.

But who’s gonna call the cops during a pandemic? And if they come to the apartment? I scream through the door that I have a fever, and they can fuck around and find out. And what are they going to do anyway, take me to jail, give me an ironclad excuse to finally leave the house? Maybe I could make some friends in the lockup, finally be part of a community again. They have no leverage on me.

(Note: I have every intention of cutting down the plants well before they flower or are readily visible to my neighbors. This is just a test to see if I can make them sprout and see where they end up in a few weeks.)

I figure this goes one of two ways – they sprout, and I kill them with neglect soon after, or they don’t sprout at all. It’ll either be a reminder that I have no idea how to garden, or that it’d be a whole lot better if we were on quarantine in a house with a big yard and a tall fence.

But we knew that already.