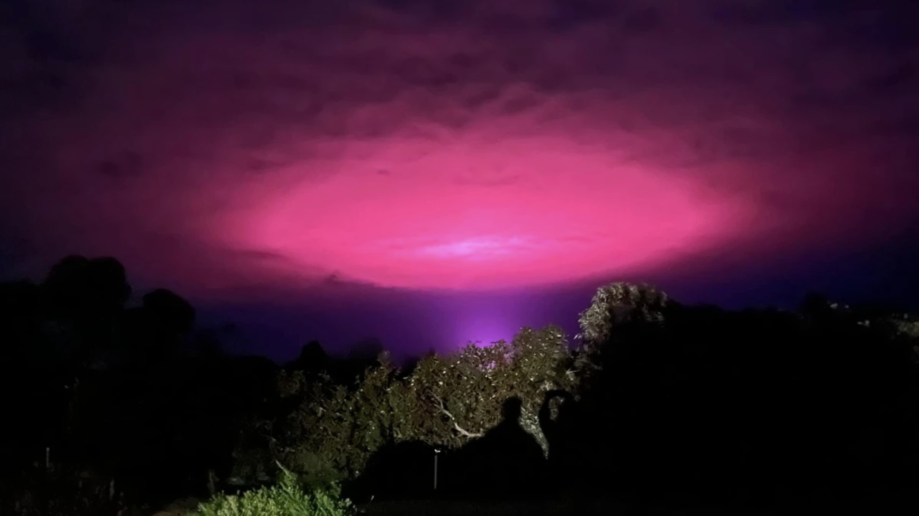 A few days ago, a mysterious pink glow lit up the sky over the Australian town of Mildura, leaving locals perplexed as to whether they were seeing an alien invasion, a misplaced display of the northern lights, or a solar flare.

Tammy Szumowski, a local, and her family speculated that the world might be ending. I just thought, “What the hell is that? This enormous pink glow in the sky is extremely strange, she said. I’m trying not to panic because my daughters are in the car.

Others tried to figure it out.

Anne Webster, a member of parliament for the region in Australia, claimed she spotted the strange, rather big pink glow while driving home in the dark. “I found that to be really odd. I immediately assumed that there must be a rational explanation for this.

In reality, the illumination came from a medical cannabis facility outside of Mildura. While testing out LED lights, the facility unintentionally divulged its position, which led to the creation of an unsettling, spooky image that both frightened and enthralled the town’s 56,000 residents.

The security guard at the building discovered that Mildura, which is located approximately 340 miles northwest of Melbourne, was receiving attention when he looked into the hot pink light’s origin.

According to Peter Crock, CEO of Cann Group, the cannabis research and production business behind the facility, “He went out on the evening and observed a glow, and he spotted a few automobiles driving up to investigate where it was coming from.”

The company typically conceals the red-spectrum LED lights used to promote plant growth with blackout curtains. However, on Wednesday, the curtains were briefly left open, sending a Bat-Signal that could be seen for kilometers around the plant in the state of Victoria in the southeast.

Australia authorized medical cannabis manufacturing, research, and cultivation in 2016. Approximately 70,000 Australians use medical weed today, generating $160 million in income in 2021, according to Fresh Leaf Analytics, a business that does market research on the cannabis industry. A 2022 study that was published in the journal Frontiers of Pharmacology found that the main medical conditions for which Australians utilize medical cannabis include pain, anxiety, and sleep issues.

The Cann CEO, Crock, said of the event, “We’ve resumed normal transmission, but it clearly attracted everyone’s attention in the meantime.” Every publicity is beneficial.