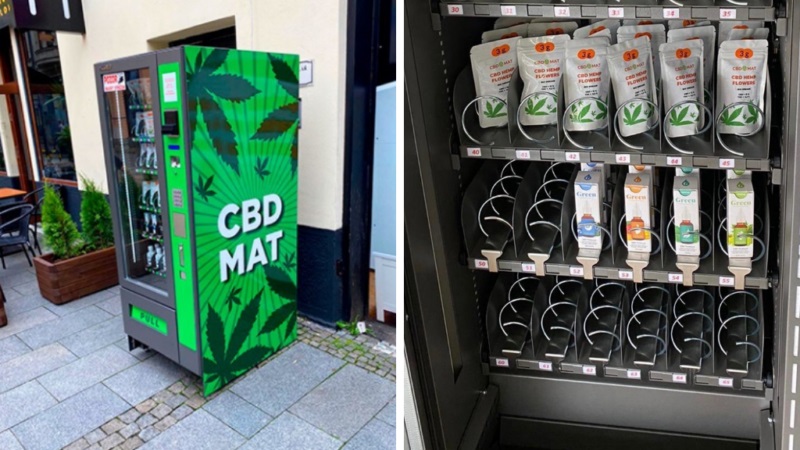 You Can Now Buy Cannabis Products From Vending Machines in Prague

Czech citizens and tourists alike can now easily and conveniently buy cannabis products from vending machines that were installed last week in the country’s capital Prague, as well as the cities of Ostrava, Cheb, and Olomouc.

But before you go running off to Prague to celebrate the most convenient way to buy weed ever, the cannabis products in question are all CBD.

In the coming weeks, the number of vending machines installed in Czech cities will grow to 50, and they will be placed everywhere from gyms and hotels to airports.

CBD Mat, the company that owns the machines, makes it very clear that, while they are cannabis products, the drinks, oils, tinctures, and edibles inside the machines will not get anyone high.

“It’s written on each product that cannabis is not intended for smoking, but only for vaporization or the production of ointments and similar,” says René Sirý, the CEO of CBD Mat.

“So far, only basic products are available. In addition to buds, there is CBD oil, drops, and hemp disinfectants,” Sirý said.

CBD is fully legalized in the Czech Republic, as long as the THC content in the products does not exceed 0.3%.

“The law does not allow individuals to buy products and similar containing THC, other than on the basis of a medical prescription or as part of a hospitalization,” a spokesperson for the Ministry of Health said.

“What people smoke illegally usually contains about 10 or 15 percent of THC. We just want to sell CBD products that can beneficial for a certain types of people [sic] without psychoactive side effects,” added Sirý.

For now, the CBD Mat will only dispense CBD products (who would have guessed, with that name), but industry watchers in the Czech Republic see it as a potentially important part of the future of marijuana retail.

Although medicinal marijuana has been legal for seven years in the country, growing and selling cannabis for recreational purposes are both illegal.

However, in 2010 the government decriminalized cannabis for personal use, and Czech citizens can grow five cannabis plants in their homes and smoke weed as long as it is not in public.

In 2013, medical cannabis was legalized, and medical patients can consume up to 180 grams of dry cannabis matter per month.

With full legalization of cannabis becoming more and more common around the world, the CBD vending machines could be an interesting concept for the distribution of marijuana when it is legalized on a federal level in the US.

While the vending machines are a novelty in the Czech Republic, the country is lagging behind its neighbors Poland and Austria, where similar machines are already commonplace.

In 2015 already, a weed vending machine called the ZaZZZ debuted at dispensaries in Washington State and is providing cannabis flowers, vaporizer pens, hemp-oil energy drinks, and other merchandise to qualified patients.

The machine works with the help of facial recognition cameras to match the buyer’s face with the ID they have to present as proof of medical eligibility.

Even with those technological advances, it’s probably still going to take some time before we see weed vending machines next to candy machines.

Although, that would just be good business for both sides.