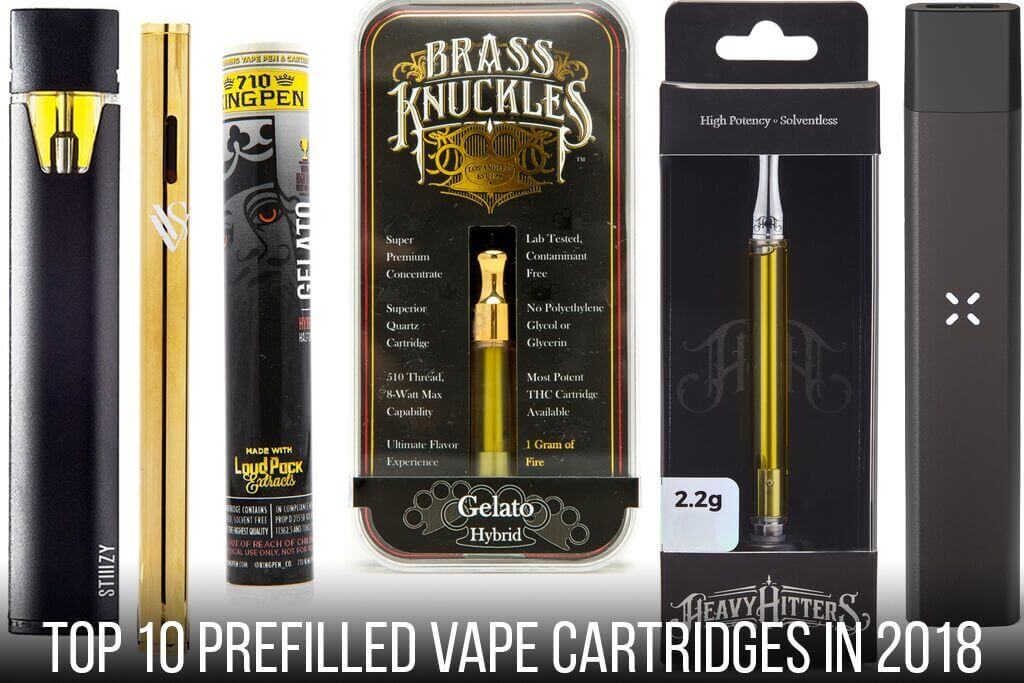 3. Brass knuckles cartridge – Some of the strongest prefilled carts but with quality control issues. 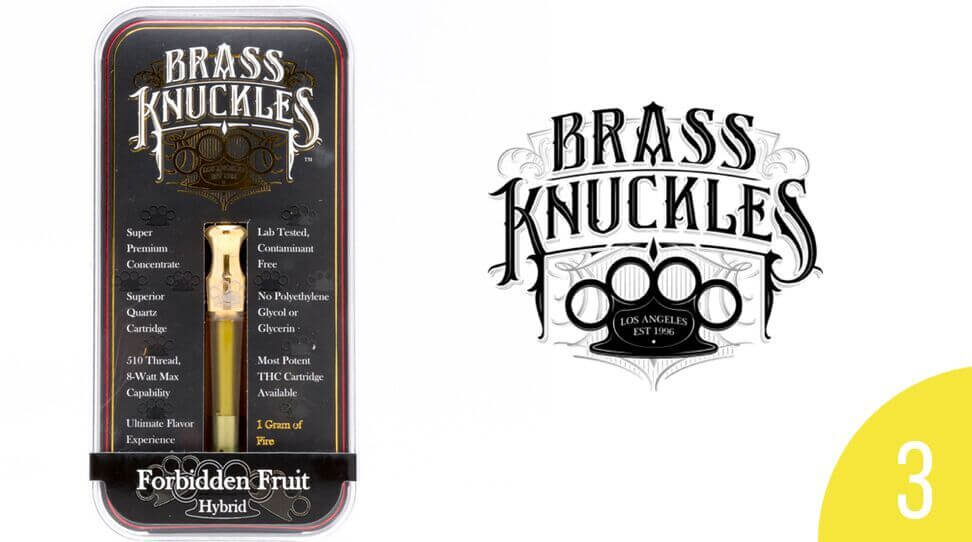 Brass Knuckles cartridges were founded in Los Angeles, California. Its carts are packed with some of the most potent CO2 extracted cannabis oil available going as high as 90% with their Forbidden Fruit Strain. They are another company, like Heavy Hitters, which has had issues with lab testing in the past, but they are taking steps to improve their productions processes. Importantly, they use CO2 extraction methods, which is a much smoother and toxin free vaping experience.

Their company is founded by an American rapper known as Xzibit along with other partners. Their ambition is to create a CO2 prefilled cartridge that is a thousand times better than the rest. They recently released a new reverse flow cartridge that looked very promising. However, it hasn’t received good feedback thus far. Hopefully, improvements will be made soon.

Brass knuckles cartridges started the new year with a new and improved super premium CO2 oil that looks significantly clearer than it did in the past. For the oil connoisseurs out there, this is an interesting improvement. They released their new cartridges under the brand name the California edition, which is what we tried and loved. The differences are noticeable when you vape the new cartridges, the cannabis oil has superior flavor, tasting crisp and clean

Check out the complete Brass Knuckles review here and find out if the product is safe to use in 2018. 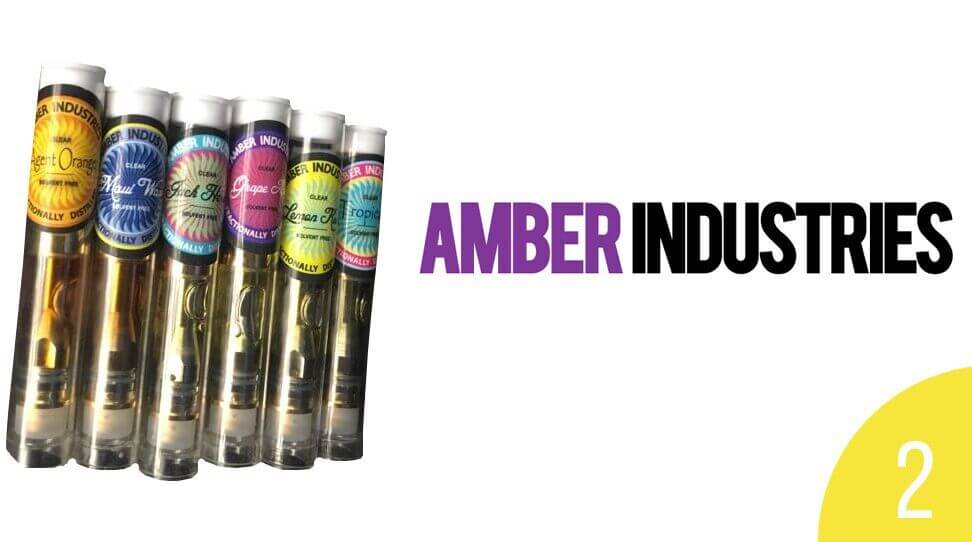 Amber industries may not be as well-known as other prefilled cartridges, but if you’re lucky enough to have access to them you’re in for a treat. These are some of the tastiest prefilled cartridges on the market, and their tastiness doesn’t dampen their potency. The carriages typically have between 80-90% THC. It doesn’t require too much vaping before you can find yourself heavily medicated, this is thanks in part to their fractional distillation process.

While the THC oil in these prefilled cartridges may be clear, tasty and potent, we did find that a small amount of product was wasted at the end. A thin layer never evaporated, but perhaps this is a small price to pay for a delicious vape. The vaping device produces enormous, voluminous clouds, perfect for making your love of THC known to the community. This may be thanks to the much thicker textured oil in the cartridge. If you can find it, grab this prefilled cartridge. 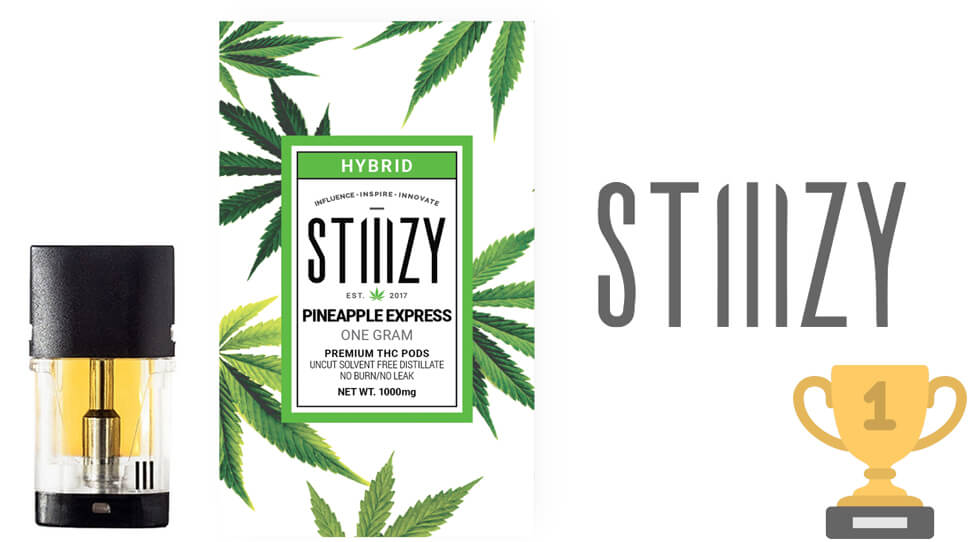 Our winner for the best-prefilled THC cartridge in 2018 is the Stiiizy vape pen and their leak-proof pods. These are filled with cannabis extracted oil that isn’t cut with any fillers and tested with a minimum of 85% THC. Dual airflow tunnels on the mouthpiece of the pod are great for vaping colossal size clouds. The cartridge is both leak and burn proof making it one of the most durable prefilled cartridges on the market. We accidentally dropped this cartridge more than few times without any problems that we would have had with a glass prefilled cart.

Stiiizy has an automatic puff activation capability that makes vaping more of a pleasant experience; it’s much more enjoyable than other vape pens that require a button to pressed when vaping. Stiiizy pods are easy to slide onto its battery and easy to pop out, a feature much more efficient than the standard 510 thread screw on carts. Stiiizy cartridges are secured by magnets which is the reason why it’s so fast to remove and add one of their disposable prefilled cartridges.

The Potency is What Really Takes the Cake

Stiiizy has some powerful THC oil cartridges tested at a minimum of 85% percent. After trying Stiiizy,  we didn’t want to go back to my formal favorite for a long time. We tried the Stiiizy strain Grand Daddy Purple, and it tasted a lot like a jolly grape rancher. These pod cartridges make it easy to vape huge clouds that are very smooth because of its dual airflow mouthpiece and ceramic coil.

This company has introduced a lot of innovation creating their vape pen and prefilled THC oil cartridges, it’s easy to see they really cared about crafting a product that will provide a better vaping experience than what’s on the market. Thanks to companies such as this one, prefilled wax cartridges have come a long way.

The Future of THC Pre-Filled Cartridges

The legalization of recreational weed across the country and around the world has introduced a lot of innovation for vape pen cartridges. Those who want to vape hash oil in a legalized state can now do so if they are 21 years of age. They have dozens of options, from strain to flavor, to pen. A lot of people have made the transition from smoking cannabis to vaping it. Its thought to be healthier, and often the flavors come through more so than with incineration.