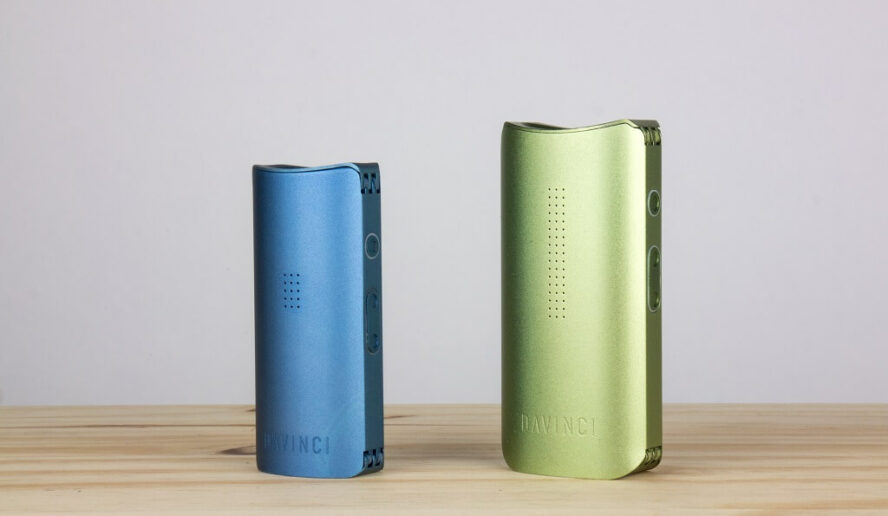 You would be forgiven for being confused when looking at the DaVinci MIQRO and the DaVinci IQ. They are so similar they could almost be twins. We say almost because there is one obvious difference between the two and that is that the MIQRO is a miniature version of its big brother, the IQ.

Having been around for a while now the DaVinci IQ is well established as one of the best dry herb vaporizers that while available, so in this feud between siblings, the big question is which one will come out on top? Let the battle Royale commence between these DaVinci Vaporizers!

What special features do they have?

As one of the smallest vaporizers available, the DaVinci MIQRO is highly portable. Even with its extended mouthpiece, you should be able to fit it in most pockets – if you can’t then it’s not a pocket worth having!

As for the DaVinci IQ, well it does have one little trick up its sleeve that the MIQRO does not have, and that is its innovative flavor chamber. To obtain the unique flavor from the vapor you simply place and type of herb inside. Put a little extra into the chamber and it gets saturated with THC. The result of vaping with this mixture is an extra intense hit.

Both models have the Smart Path mode. During each session, the temperature is gradually increased. Both the MIQRO and the IQ also feature a zirconium pearl which is located on the inside of the chamber cover and serves to enhance heat distribution.

Having already mentioned just how small the MIQRO is then, it is clear that, when it comes to portability it is a clear winner over the IQ. That being said, it is quite clearly a winner when it comes to portability over most of the other vaporizers out there. As the name would indicate, the MIQRO is micro-sized BUT it still has most of the features that you can find in the IQ. DaVinci has certainly worked their magic in this instance.

Don’t get us wrong, the IQ is still portable. Well, it is if you favor the flat mouthpiece over the extended one – in which case you might need slightly roomier pockets. So, if you decide to go with the extended mouthpiece, which has the advantages of its vapor cooling ability, then just be prepared to carry it in your bag.

The IQ is bigger, so you would expect it to have a bigger oven and you would be right. However, do not discount the MIQRO which still has a good-sized oven – although it will only hold enough for one person. However, this isn’t an issue as the MIQRO has specifically been designed to be a solo vaporizer.

Both the MIQRO and the IQ use conduction heating, and both feature the zirconium pearl in their ovens which distributes the heat in an even manner and prevents charring that can occur in other somewhat inferior conduction vaporizers.

DaVinci MIQRO – The Highlights and Drawbacks

The MIQRO is a highly portable, stylish and very elegantly designed vaporizer. The design features an extended mouthpiece that has been incorporated to cool down the vapor. There is a useful, and rather cool, feature in the form of an LED light grid. The interface is simple, and the battery is replaceable.

The MIQRO has a 5-year warranty and whilst it is relatively new to the market it is hard to say how reliable it will be. However, if the IQ is any indication then this should be a very reliable product.

On the downside, not only can the flat mouthpiece be uncomfortable, but the unit can become hot over time.

DaVinci IQ – The Highlights and Drawbacks

The IQ is a rather handsomely designed vaping unit that still holds its own amongst the others on the market. It features a somewhat informative and innovative light grid display and interchangeable batteries. The IQ is easy to use and the flavor chamber is another exciting feature that DaVinci have added to the design.

The IQ comes with a good 10-year warranty and is known to be reliable and long-lasting. There have been some issues with people breaking off the zirconium pearl but that is not a design issue and is usually due to user error.

On the downside, the IQ does get hot after extended periods of use and the extended mouthpiece does not help it at all when it comes to portability.

While the MIQRO and the IQ have their differences, choosing between the two shouldn’t be too complicated.

The MIQRO is the clear choice if you are looking for a premium easy to use portable that is ideal for solo use. Despite its rather small exterior, it packs quite a few useful features.

If, however, you are looking for something with a bigger oven, then the IQ with its cool flavor chamber and smartphone app is the perfect choice. Whilst you might have to sacrifice some of the portability of the MIQRO the IQ is still one of the most innovative dry herb vaporizers available.

Which would work best for you?