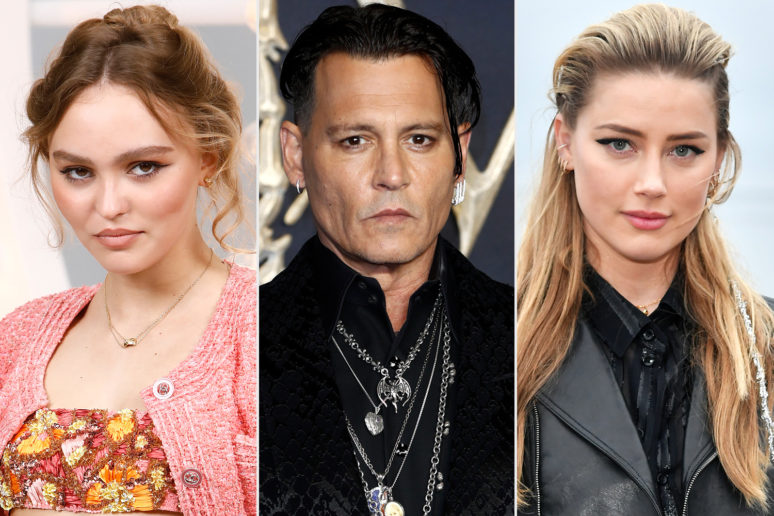 By International Highlife May 6, 2022
News

Amber Heard says she felt “protective” over Johnny Depp’s children during their relationship.

Yesterday during the trial,  she described a fight with Johnny over his daughter Lily-Rose Depp, now 22, in November 2013.

Heard said she “started to feel protective” of Lily-Rose after only knowing her for a short time and shared her concerns about “a famous musician over the age of 18” staying at their home.

“I felt protective over Lily-Rose and concerned and naturally they were not my children, it’s not my place and I understand that I know it’s a sensitive subject, so I understand why Johnny got so upset with me,” she said on the stand.

“But that and the introduction of the weed with his daughter, she was so young, I felt protective,” she added. “It’s not my place and I made him really angry by weighing in on that.”

During his testimony in his 2020 libel suit against the U.K.’s The Sun, Depp said he “never encouraged my daughter to use marijuana.”

“My daughter was 13 years old and, as we all know, at 11, 12, 13 years old, when you go to high school parties you are approached by people who will want to give you a drink because they’re drinking,” Depp said at the time.

The actor also shared the advice he said he told his teenage daughter.

“Listen, sweetheart, if you are at a party and someone hands you the joint, take the joint from that person and pass it to the next person… don’t experiment with drugs with people you don’t know,” he said.

“Please do me the honor of coming to me when you are ready when you really feel you are ready,” Depp continued. “Because I don’t want your first experience in this world to be with people you don’t know, taking things you don’t know that I can’t trust, so it’s a safety issue.”

He said he wanted Lily-Rose to avoid going into a “paranoid tailspin.”

“I knew that the marijuana I had myself, that I smoke myself, is trustworthy, is a good quality and I was bound and determined not to have her try any drugs out there in the world because it’s too dangerous,” he said.

“If that is wrong in your eyes, I appreciate what you think but I was raising a daughter and I was being a responsible parent as far as I was concerned,” he added.

Depp, who has said multiple times under oath that he has never struck Heard or any woman, has testified that his “goal is the truth” as he seeks to clear his name in the trial, which is being televised live via various outlets. Ahead of the trial, Heard said in a statement that “hopefully when this case concludes, I can move on and so can Johnny. I have always maintained a love for Johnny and it brings me great pain to have to live out the details of our past life together in front of the world.”

One response to “Amber Heard: I Felt ‘Concerned’ When Johnny Depp Gave His Daughter Lily-Rose Marijuana as Teen”