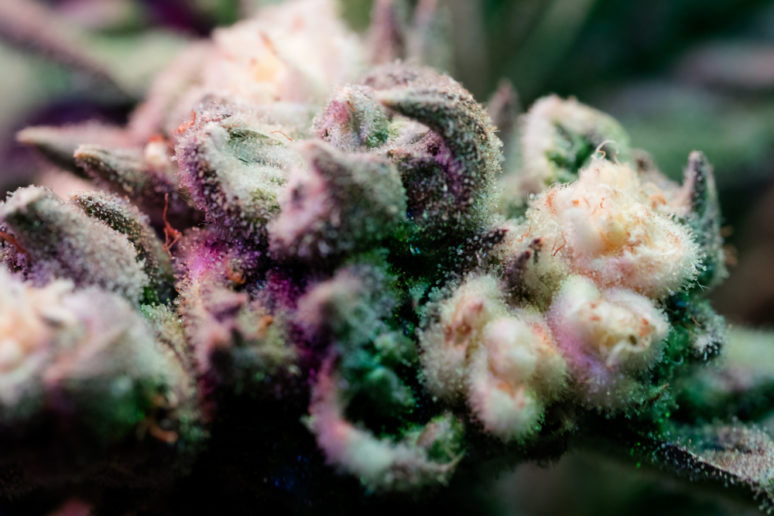 Albino Cannabis – light burn or true albinism? We’ve all seen these photos of unreal-looking white buds and leaves on cannabis plants, so what’s the deal?

The short answer is that yes, there is such a thing as albino cannabis – but only up to a point. Let’s explain… if a plant is an albino, that means it’s not producing chlorophyll. If it isn’t producing chlorophyll, it probably won’t survive very long on its own, as chlorophyll is essential for photosynthesis, which is how plants get energy from sunlight.

If a plant can’t produce energy from sunlight, it will die unless it is mistletoe or a similar parasitic species, which can hook its roots into another plant and steal its nutrients! Yup, that happens…and many of these parasites are truly albino, with no green coloration at all.

So, what’s the deal with these strange white cannabis buds and leaves? How can a cannabis plant even get close to flowering if it can’t produce chlorophyll?

Well, the answer is simple. The cannabis plant isn’t truly albino – only some parts of it are! The non-albino parts can photosynthesize and can supply the other parts with the nutrients it requires. Occasionally, you might also see an all-white seedling from a pack of seed – but it’s pretty much impossible that a fully albino baby could survive to maturity.

This phenomenon is scarce, and rather than albinism, it’s called variegation in plants.

It usually pops up in commercial breeding programs, which can throw up all sorts of interesting genetic anomalies that wouldn’t necessarily become established in the wild. One well-known example is DJ Short’s Vanilluna, which can occasionally express white patches on flowers and leaves.

Interestingly, many plant cultivars have this tendency, and many are prized for their attractive appearance. In cannabis, it’s generally seen as undesirable, as the individual is likely to be less productive than its all-green sisters – but there are still plenty of people fascinated enough by the phenomenon to be very happy when they see one sprout!

(Note – if you do come across albino or variegated cannabis plants, try feeding them extra sugars such as 1ml molasses per liter of water. As they can’t produce their sugars, you may help them out and boost their productivity a little.)

So does that explain all these examples of white flowers and leaves you can find on the internet? Well, yes, some of them – but there are plenty of posts and articles out there stating that albino cannabis doesn’t exist. Why is this?

Well, it turns out that there is another reason for white buds and leaves! It’s a result of excessive light intensity from LED lighting systems. It is rarer with hot HPS lights – your buds will usually burn and go brown before they bleach in those temperatures (although it can occur with HPS lights shielded by the glass)! It’s much more closely associated with LEDs, which provide a tremendous amount of light intensity at cooler temperatures.

But here’s the thing – even though it’s clear that excessive light may cause white patches to occur, it may do so by flipping a genetic switch! In many plants, variegation increases in high-light conditions – so, in fact, by keeping your LEDs too close to the plant, you may be coaxing out a shy recessive trait.

So, white flowers and leaves in cannabis can undoubtedly be caused by light bleaching too, but it’s clear that genetics certainly do have a role to play. If you have pics of this unusual phenomenon, why not post them in the comments and let us know all about it!