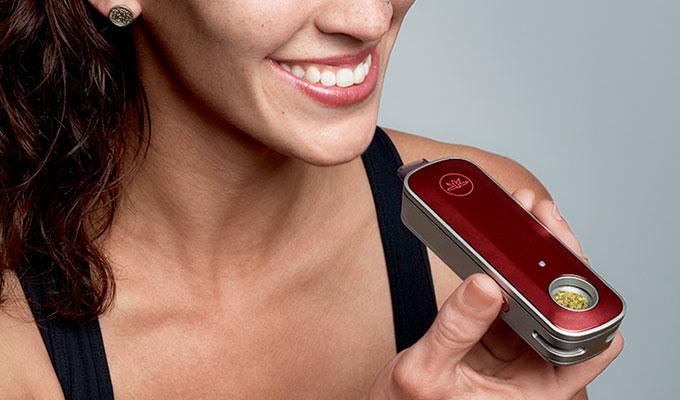 The Medical Marijuana market is growing in support and size by the day. While normally smoked, marijuana can be consumed through a number of mediums including edibles and in particular vaporization. Vaporizing works by heating your Cannabis up to a point where the active compounds are released in a vapor. In comparison to smoking, it is considered to be a significantly healthier means of enjoying your herbs. Smoking is known to be one of the most detrimental practices on the body, responsible for a range of debilitating disease. Some of the illnesses associated with smoking include respiratory problems, cardiovascular issues and in some cases even cancer. The reason for this, is the toxins the actual combustion of the plant material. Combustion releases a number of harmful toxins which are known to cause negative effects on the human body when inhaled. While the traditional methods of joints, bongs or blunts provide us with fast hitting effects they also provide us with long term negativities. In this article you will learn the health benefits to making the daunting yet enjoyable switch to vaping. With a massive selection to choose from, from the Crafty to the Volcano, you should have no issues in finding a vaporizer that will have you wishing you were vaping all along.

The toxins released in smoke are a never ending list. Toxins are particles which can cause considerable damage to the human body. The toxins associated with smoking are released when the plant material is lit. The burning creates smoke which we then inhale directly into our lungs at the expense of our health. Where tobacco is extremely addictive, Marijuana isn’t which makes the overall transition to vaping that little bit easier. The toxins and carcinogens released during smoking are known to cause cancer among other life altering diseases. Vaping eliminates this problem by producing considerably less of these toxins and carcinogens. A collaborative study between NORML and MAPS has provided us with the evidence that vaping actually releases 20% more THC than smoking, one toxin we are happy to have more of!

The smells associated with Marijuana are very well known. I’m sure at some point in your life you caught a whiff of that sweet, unique scent while in public and quickly tried to figure out where it was coming from. Would you believe me if I told you your sense of smell would be even stronger if you switched to vaping? Its true. Smoking is known to irritate your nose and seriously affect how well you can smell things. The reason for this is the olfactory nerves situated at the back of your nose are directly damaged by the inhalation of smoke. These nerves are what signal to the brain what we can smell. Continued abuse of these nerves through smoking can actually lead to a complete loss of your sense of smell. With vaping, damage to these nerves is severely minimised allowing you to enjoy all the scents each day with far more ease than smoking.

Like smell, loss of taste can be one of the biggest drawbacks associated with smoking. The sense of taste is actually a combination of taste and smell, it is for this reason that smoking can seriously affect how you taste things. While it doesn’t nullify your taste buds, smoking drastically damages them, leading to a far less satisfactory level of taste and smell. Vaping doesn’t have these issues and it is actually well known how vaping can actually accentuate the flavors of some strains. Vaping is a lot more flavorsome due to the lack of smoke associated with it. Each Cannabis strain has its own taste characteristics, these are far less noticeable through smoking than vaping which is one of the main reasons vaporizers are gaining the popularity that they are. Some vaporizers are designed specifically to promote flavor, read reviews and find a model which you feel represents what you are trying to find. The switch from smoking to vaping is daunting, however, the effects of the switch are more than noticeable from the very beginning through the senses of smell and taste returning to the user. A vaporizer which is famed for the taste it can produce is the Crafty Vaporizer by Storz & Bickel. Storz & Bickel are a world renowned vaporizer company whose products are all medically tested.

Respiratory diseases affect our lung function and our ability to breathe easily. Continued abuse of the lungs by means of smoking can lead to truly debilitating disease, examples of which include COPD (Chronic obstructive pulmonary disease), Emphysema and even in some extreme cases lung cancer. Smoking directly damages the lungs ability to prevent infection, leading to damaged air sacs and breathing tubes. The damage smoke can cause while not reversible can be seriously helped by switching to vaping. Lungs, while incapable of repairing themselves fully will immediately begin draining your lungs of toxins the moment you cease smoking. It is believed that vaping is considerably healthier on your lungs, the switch while difficult to make, could be your saviour in the long run.

Cardiovascular diseases are the diseases which directly affect your heart and blood vessels functions. Our heart is the most important organ in the body, without it we simply wouldn’t function. The heart works by pumping blood to the rest of the body, our bloods contains oxygen and when strained the amounts of oxygen being carried can be significantly compromised. Some of the diseases which smoking can directly influence are coronary heart disease and even stroke. Smoking creates Atheroma in the arteries, Atheroma is a fatty material which can lead to clogging up of the arteries. This makes blood flow a lot more strained than normal and can directly contribute to diseases such as Angina or even heart attack. Vaping is considered to be a great deal healthier for the body due to the toxins and carcinogens being a lot less than when smoking. These toxins are what directly cause the diseases mentioned, the body isn’t designed to inhale smoke and therefore it isn’t capable of the abuses associated with smoking, vaping seriously diminished these toxins making it a far healthier alternative to the traditional methods of smoking.

Family and Friends will benefit greatly when you start vaping instead of smoking. Not only will they reap the benefits of a healthier you but they will also benefits healthwise too. Second hand smoke is a known killer of people who don’t even smoke, suffering by association this can be a devastating reason to suffer such debilitating diseases. When you switch to vaping your family & friends will benefit just as much as you, they become a lot less likely to suffer and will enjoy your new found lease of life quitting smoking has caused. Along with the health benefits, the smell of the smoke will be a distant memory, we all are familiar with the same old complaints about the smell of our clothes and breathe and it’s frustrating. With vaping the strong smells are a thing of the past.

Cannabis or Marijuana is quickly gaining popularity as a medicine for a wide range of ailments and illnesses. It is believed that vaping Cannabis can give you the same fast pain relief as smoking it. Smoking can definitely provide us with a fast hitting high, however, the linked health issues are a definite problem. With vaping, we can still have the fast effective relief without the worries of the issues smoking causes. There are a wide range of vaporizers to choose from, from the portable to the desktop and from the Crafty to the Volcano, you are sure to find a vaporizer that suits you. While the health benefits of switching to vaping alone could be enough to sway you, the monetary savings are also worth a mention. While expensive at first to purchase, the amount of materials you are using will seriously drop. Giving the same effects with significantly less expense is certainly a factor in why Vaporizers are taking the Cannabis Community by storm.

One response to “7 Health Benefits of Marijuana Vaporizers”